It’s a supreme salute to illustrious A-lister Jane Seymour and her accomplishments, beyond the film industry and extending to her successful business empires and motherhood.

While she is still being celebrated as Bond girl in Live and Let Die, as Queen Marie-Antoinette in La Révolution française, and an appearance in Young Winston as Winston Churchill's lover, Seymour has transitioned as a star in the world of diamonds. 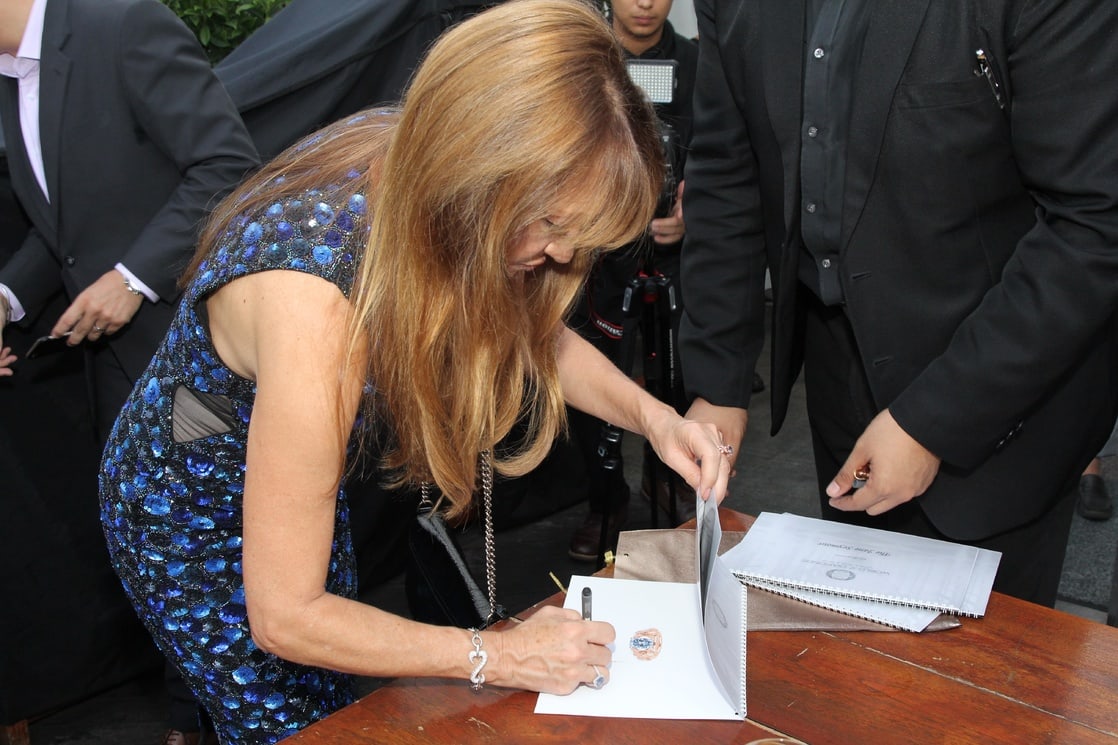 “Even though I make those movies, I find myself wishing that more of those magic moments could happen in real life.” – Jane Seymour

The highly coveted ring utilizes a base of platinum – among the world’s rarest and most enduring metals – and lavishly plated with rose-gold.

Crafted with utmost precision in Geneva, the combination of matt and gloss finish dazzles in the spotlight, and when coupled with the mesmerizing blue hue of the cushion-cut diamond, this, even the panoramic views of Monaco, cannot trump.

It is reassuring that this World Of Diamonds creation is the first and only jewelry piece in the world named after the lady herself, which she had proudly endorsed during her trip to Singapore.

Beyond flaunting the masterpiece on her graceful fingers, the accompaniment of a blue dress played a part, coupled with Seymour’s enthrallment in snapping ‘selfies’ with The Jane Seymour. 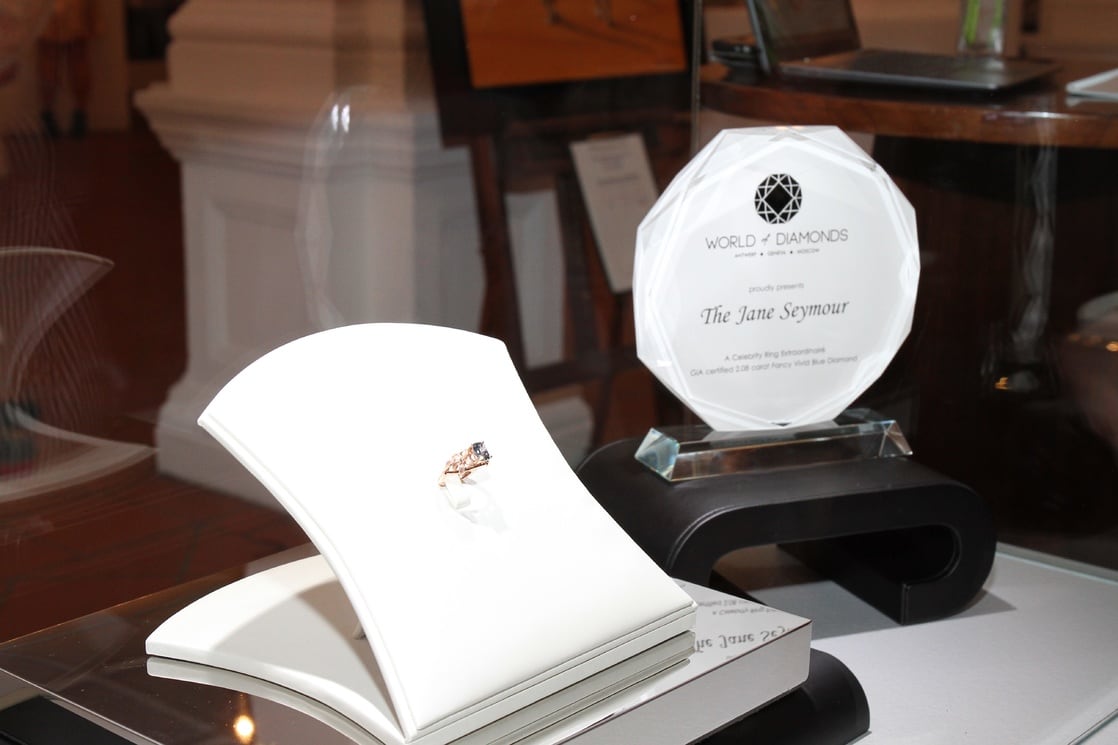 Despite her admirable Emmy Award, two Golden Globe Awards and a star on the Hollywood Walk of Fame, the celebrity is exceptionally down to earth. This has been well reflected in the ring’s floral motif – symbolizing Seymour’s grace, elegance and demeanor.

Erodium malacoides, the flower of choice, was selected, and with a naturally purple to magenta color in nature, the rose-gold plating was well represented.

It comes as a pleasant surprise to all of Seymour’s fans that during an interview with Singapore's Channel NewsAsia, the celebrity acknowledged that The Jane Seymour was “matching and doing very well” with her Open Hearts bracelet.

The Open Hearts jewelry collection signifying "love has no boundaries and flows unconditionally", was designed by Seymour, and which The Jane Seymour celebrity blue diamond ring can ultimately complement. 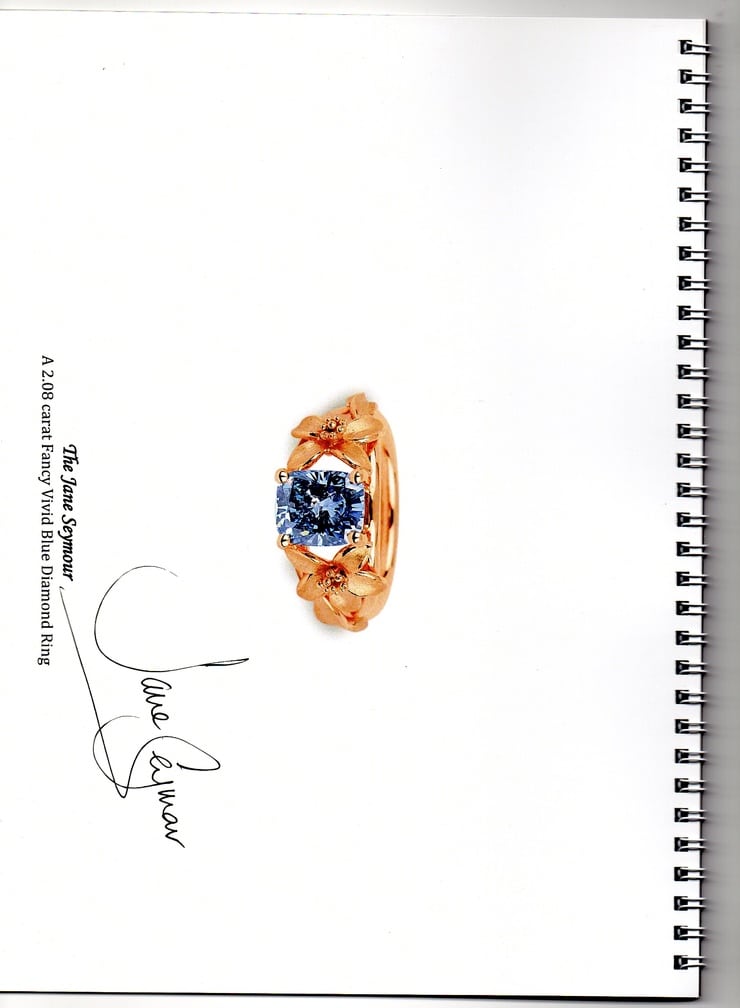 And what charm does the honorable treasure not exude? It embodies infinite fondness through a hypnotic magnetism, set to seduce even the most demanding diamond connoisseurs.

Even though the minimum USD 2,000,000 price tag should not strain the world’s finest collectors, the creators, Russian mining-giant World Of Diamonds Group, shall only pass on the ring to a qualified individual that meets an undisclosed criteria.

As you will apparently never find a piece of celebrity jewelry in the market, unless it is pre-owned - take for example the prized collections of Elizabeth Taylor, Ellen Barkin and Maria Felix, the world is now waiting to know who the eventual owner of this sparkler would be.

“The invitation to behold this creation would rather you not compare The Jane Seymour to anything else in the high jewelry world. It is a celebratory treat, more comparable to a mega-yacht or a ticket to the moon.” – Karan Tilani, Director, World Of Diamonds Group

So far, there have been a few enquiries including from royal families, and the privileged one who qualifies to purchase would receive the ring in a handcrafted leather treasure chest while also being presented catalogues of The Jane Seymour, signed by Seymour herself.

The Jane Seymour was presented to Seymour during a lavish dinner party at CÉ LA VI Singapore on the 25th April, after-which, it retreated to a vault as part of World Of Diamonds’ private collection.

Following this, The Jane Seymour was exclusively displayed at The Vortex on 29th April at the Raffles Hotel, attended by Jane Seymour & Singapore’s President, on the 3rd May at the Royal Albatross Ship, on the 6th May at Angelina, Capitol Piazza during an exclusive lunch, and on the 10th May at 1-Altitude, the world’s highest al-fresco bar.

Concluding the festivities, World Of Diamonds had hosted a champagne & cocktails party on the 18th May at CÉ LA VI Singapore.